Insight into Romanian prisons: Evidence which is worth lives

Refusal to provide toilet paper and medicine – the photos in our gallery ↓ depict it better than words.

These photos were partly taken with smuggled phones by people who risked their life to do so.

By smuggling the phones and taking pictures, our brave Romanian fellow inmates risked to be “forgotten” by the justice system at sentencing.

The photos would have cost them additional months in the Romanian prison system. 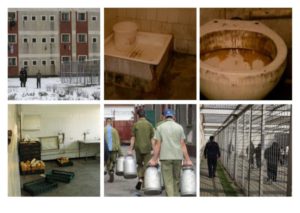 You can find bigger pictures and detailed description on our Facebook page!

Even more horrific than what you can see in the pictures are the attacks perpetrated by the guards.

Sometimes out of pure sadism, sometimes out of boredom, out of deep rooted homophobia, or just because they finally had the opportunity to try out violence without being punished for it.

The Council of Europe adopted  the European Prison Rules to ensure the dignity of all prison inmates.

These rules are based on nine principles.

They invoke the respect for all human rights, while also ensuring mild prison conditions that make a reintegration into society possible rather than causing severe diseases and post-traumatic stress disorder.

Although the European Prison Rules are not binding, they are part of the European Convention on Human Rights!

Thus, the conditions in Romanian prisons are not only human rights violations, but also concrete violations of European laws.

By setting up the European Court of Human, the EU guarantees a type of legal protection unique in the world and in history.

As EU citizens, it is our right and our obligation to make use of this institution.

We, as victims, will take this matter to the European Court in Strasbourg in order to put an end to these medieval conditions.